The Center for Contemporary Graphic Art and Tyler Collection Archive (CCGA) is a sister institution to the National Gallery of Australia’s Kenneth Tyler Printmaking Collection, located in Japan’s Fukushima Prefecture. Following the tragedy of the Tohoku-Kanto earthquake and subsequent tsunami and nuclear threat, we are very pleased to report that all staff members are safe. The CCGA building sustained some damage and is currently closed; our thoughts and best wishes are with the CCGA staff and their families as they face this difficult time.

With four words to illuminate their aspirations – collecting, seeing, thinking, and creating – the CCGA was opened on April 20, 1995. The centre houses a complete collection of the prints produced by at the Tyler Graphics Ltd. workshops on the East Coast of the United States of America from 1974 until 2001. The centre also supports a range of research and exhibition programs.

Since the opening exhibition Graphic vision: Kenneth Tyler Retrospective Exhibition: Thirty Years of Contemporary American Prints in 1995, CCGA has maintained an intensive exhibition schedule, staging at least three – and often four – shows per year. In 1996 American Prints today: 1st Exhibition of Prints from the Tyler Graphics Collection Archive showcased the great diversity of Tyler’s workshops and the artists who worked there. Juxtaposing the bold geometric work of Ellsworth Kelly, the lyrical still-lifes of Ed Baynard, eclectic early works of Frank Stella and the organic prints and three-dimensional screen of Steven Sorman – along with many others – the exhibition demonstrated the breadth of CCGA’s collection and set the high-standard of exhibitions to come. 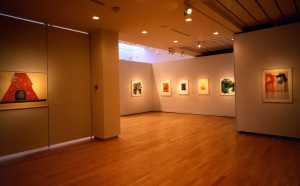 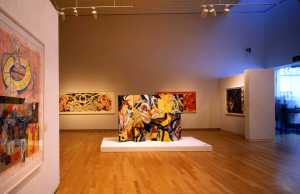 This exhaustive exhibition was followed in 1997 by The Graphics of James Rosenquist for which the artist visited the CCGA and participated in forums and public programs.

The Graphics of James Rosenquist featured the hyperrealist Welcome to the Water Planet series. In this series Rosenquist’s experience as a billboard painter and designer is clear: larger than life lipsticks and fantastical depictions of vegetation and outer space in a dazzling array of lurid colours belie his concern with the state of the planet earth. Alongside the artworks themselves images and video documenting the innovative paper-pulp project were shown. You can read more about the Water Planet project on the NGA’s Kenneth Tyler Collection website here: http://nga.gov.au/Rosenquist/Default.cfm 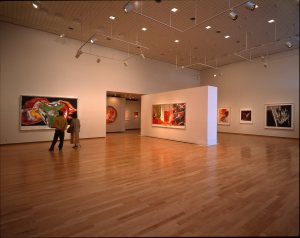 Many other artists from the Tyler Graphics Collection Archive have been the subject of comprehensive solo exhibitions at CCGA – Robert Motherwell, David Hockney and Roy Lichtenstein – to name but a few. For a full exhibition history visit: http://www.dnp.co.jp/gallery/ccga_e/exhibition/list.html. 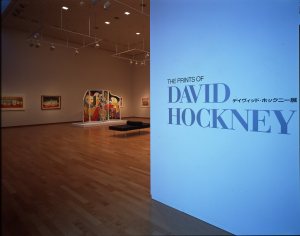 An exhibition featuring the prints of Josef Albers, Ellsworth Kelly and others entitled The World of Geometric Abstraction was on display at the CCGA when the earthquake struck, and it is hoped that visitors may soon be able to access this again. As well as their rigorous program of Tyler Graphics Ltd. based shows, the CCGA is dedicated to promoting local contemporary artists. Print Art Today in Fukushima is scheduled for September of this year and we at the National Gallery of Australia sincerely hope that this event will take place despite the tragedy that has befallen Japan and its people.