To celebrate the National Year of Reading the children’s gallery here at the NGA is showing Word Pictures, an exhibition that focuses on the use of text in works of art. Four artists from the Tyler Collection – Jasper Johns, Bruce Nauman, Claes Oldenburg and Robert Rauschenberg – are represented. Below we have compiled a selection of  images showing these important artists at work on projects featured – or related to those featured – in the exhibition. Hover your cursor over the images to read descriptions.

Johns created a series of works involving the letters of the alphabet at Gemini GEL in 1969. Letters and numbers are a recurring theme in Johns’ art – check out his Color numeral series here: http://tylerblogs.com/2011/03/09/jasper-johns-the-color-numeral-series/ 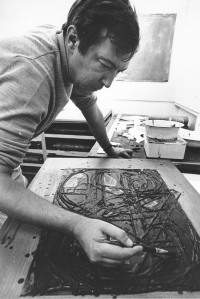 In Clear vision Nauman juxtaposes the words ‘clear’ and ‘vision’ with vigorous marks that, ironically, blur the text and render it unclear. We looked at another or Nauman’s text-based works recently: http://tylerblogs.com/?s=bruce+nauman. Below you can see an image of the artist working on a similar project at Gemini GEL.

The letter Q as beach house, with sailboat  1972

Oldenburg’s  quirky work is one of several created during the same period in which letters take on the characteristics of objects: here the letter Q becomes a beach house, situated idylically on the shores of a tranquil stretch of water. Like Johns, Oldenburg’s work often features letters and numbers. The image below shows him at work on a later print Chicago stuffed with numbers, that demonstrates this preoccupation.

Rauschenberg’s Cardbird series plays with language in different ways. Aside from the obvious inclusion of the text printed on the works themselves, the title ‘cardbird’ is a play on ‘cardboard’, the material used to create the works. You can read more about the work here: http://nga.gov.au/Rauschenberg/ 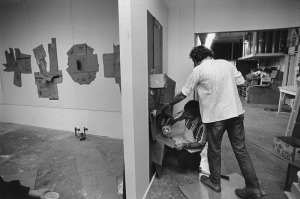 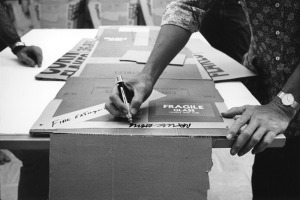 The Word pictures exhibition runs until February 10, 2013 – don’t miss it!