Following our recent look at Anthony Caro’s paper sculptures produced at Tyler Graphics we wanted to discuss the importance of papermaking in Tyler’s workshops and the innovative ways in which handmade papers were used. As this story spans almost four decades we’ve just touched on a few things here and hope to explore it further in the new year with a dedicated ‘paper page’ on our website.

Upon opening his own workshop in 1965, Tyler began a long and involved investigation into handmade paper. The American ‘print renaissance’ of the 1960s – which saw graphics increase in both complexity and size – necessitated a more diverse range of paper that could accommodate the needs of the new generation of prints. True to his reputation as an innovator, Tyler played a key role in researching and developing new papers and creative ways of using them.

It became clear to Tyler that if prints were going to gain recognition as significant contemporary works, they needed to be produced on a scale to rival that of painting. Robert Rauschenberg’s Booster of 1967 added urgency to Tyler’s ‘paper chase’, requiring sheets of sufficient size to print a life-size X-ray image of the artist. Tyler initially looked to American industry for the solution, but when this proved fruitless (due to poor commercial return), he cast his eye further afield towards European paper mills. It was at Arjomari Prioux, a fine art paper manufacturer in Epinal, France that Tyler discovered continuous rolls of mouldmade paper which could be cut to size. The prohibitive costs of importing such products made this a short-term solution only, and prompted Tyler to forge connections with paper makers closer to home – such as John Koller of HMP – before setting up his own facilities.

A particularly significant milestone in Tyler’s handmade paper journey occurred in August 1973. Inspired by his previous visits to France, Tyler decided to hire a paper mill and take an artist with him to embark on his first major foray into papermaking. Who better to collaborate with Tyler on this project than Rauschenberg, who ‘could invent on the spot, had a lot of ideas and loved the challenge’[1]? Furthermore, as a darling of the American art scene, Rauschenberg had the necessary clout to fuel publicity around the project.

And so, Rauschenberg, Tyler and a small team from Gemini GEL visited the 14th century Richard de Bas paper mill, nestled in the picturesque countryside of southern France, with the aim of producing a body of work over the course of four days. Rauschenberg brought two key ideas with him, to ‘allow the form to become the print’ and to ‘paint in paper’.[2] The resultant Pages and Fuses series of works are highly experimental investigations into the possibilities of paper pulp. Composed of natural fibres, the Pages were created by pouring pulp directly onto the mesh in a free-flowing form, or by using shaped moulds that had been made by a tinsmith to Rauschenberg’s specifications. The artist then embedded rags and string in the wet pulp to add further texture.

In contrast to the subtle neutrals of the five Pages, the Fuses burst with vibrant colour, imparted by concentrated Swiss dyes. Clashing the handmade with the commercial, Rauschenberg incorporated magazine imagery printed on Japanese tissue onto the surface of the wet pulp, such as a bird and telegraph pole in Link.

The success of the Richard de Bas project triggered a renewed interest in handmade paper across America, in what has been dubbed ‘the paper revolution’[3] of the 1970s. A crucial shift was occurring in the way that paper was perceived by the artistic community: it would no longer be limited to its traditional supporting role, but rather was embraced as an independent medium.

A lovely photo album full of candid shots documenting Tyler and Rauschenberg’s time in France was put together by fellow collaborator and master papermaker Marius Peraudeau. Here are a few pages for you! 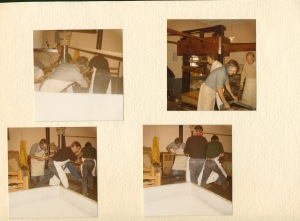 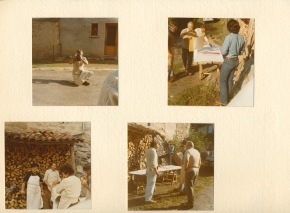 With the establishment of Tyler Graphics in 1974, papermaking became a key focus of the workshop’s activities. The garage at Bedford Village was converted into a paper studio, kitted out with a beater, press, couching table, plastic pails, rubber aprons and gumboots. Here, Tyler collaborated on major paper pulp projects with Frank Stella, Ellsworth Kelly, Kenneth Noland and David Hockney, wherein the very substance of paper was transformed into unique works of art.

Interest in handmade paper snowballed and the activities of the workshop soon outgrew the garage-cum-paper studio. A custom-built paper mill at Mount Kisco superseded it and spectacular projects with artists such as James Rosenquist and David Hockney followed. We look forward to investigating these in future posts!