Collage was a Surrealist inspired art practice adopted by Motherwell. Originally invented by Cubist artists such as Pablo Picasso and Georges Braque, collage combines different visual elements together to create multi-faceted compositions. Motherwell first made collages with Jackson Pollock for a 1943 exhibition, and later compared the process to creating a personal journal:

Collage somehow came to be my joy, and has been ever since. Also it has another function: sometimes I get stuck in painting … and often, after shifting to collage for a time, I may resolve the painting problem when I return to it.

For Motherwell collage was also problematic:

Given these disparate and conflicting elements, how ultimately to unify them. It’s a painful, precarious way of making order. The separate elements tend to carry on guerrilla warfare with each other.

Despite these difficulties, Motherwell rated collage highly and was one of the very few American artists to pursue this practice consistently during his lifetime. Motherwell’s printed collages, such as the America-La France variations series, reveal the painstaking process he undertook to develop his compositions in a step-by-step manner. The title for this body of work was derived from the name of the company that made American fire engines, rather than some cultural salute to France by the artist. 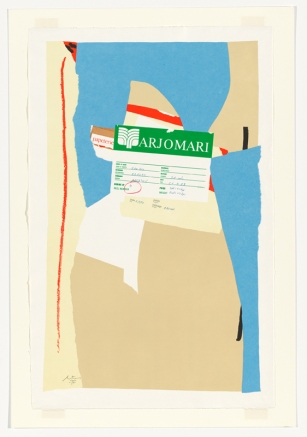 Robert Motherwell: At five in the afternoon is on display in the Orde Poynton Gallery until 6 October 2014.