With sadness we share the news that artist Ed Baynard passed away last week on November 8. Baynard was born in Washington DC in 1940 and was known for his still life watercolours, paintings and prints. Baynard worked with Kenneth Tyler and the Tyler Graphics team several times in the 1980s and 1990s, experimenting with woodcut, intaglio, lithography and monotype to create four series.

The following essay by Julia Greenstreet was first published in Workshop: The Kenneth Tyler Collection 2015. 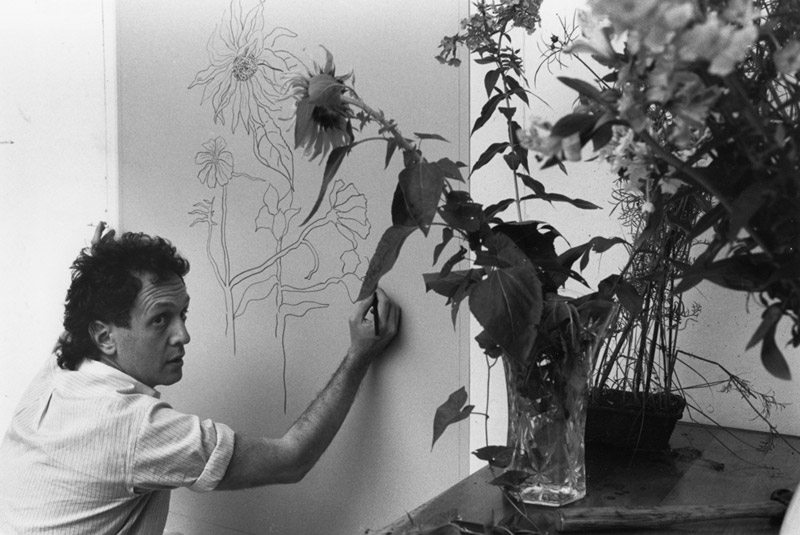 Ed Baynard collaborated with the TGL team in 1980, 1988 and 1997 to transpose his elegant imagery of flowers and decorative vases into print. Woodcut – a medium well-suited to his stylised compositions rendered in bold line and flat colour – provided particularly fertile grounds for experimentation.

Baynard was first introduced to woodcuts during the summer of 1979 in Provincetown, Massachusetts. Living in the apartment below his was local artist Ferol Warthen, who made delicate white-line woodblock prints[i] to sell to tourists, transferring colour from block to paper in a rubbing technique that incorporated a seashell.  When Tyler invited Baynard to work on a project, it was the memory of this simple yet effective technique that inspired the artist to make his own series of woodcuts. 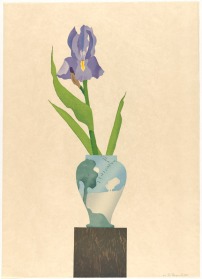 ‘Simple’, however, is not a word in Tyler’s vocabulary and for the next year artist and printer experimented with each element of the process, from carving, inking and printing techniques, to types of paper and wood.[ii] Baynard admits to having known ‘zip’[iii] about woodcuts and fondly remembers Tyler as a gifted teacher who guided him through the project: ‘He caught my drift […] and I in return caught his.’

The 1980 series of eight woodblock prints began with watercolour studies, the individual shapes of which Baynard then carefully traced onto Mylar and transferred to blocks. The grain direction of six different woods – fir, pine, luan, walnut, Russian ply and mahogany – was exploited to emphasise form. In A quarter moon, for example, the prominent grain of the pedestal emphasises its verticality and leads the viewer’s eye upwards to the centre of the composition. The precision of woodcut was tempered by areas of subtle blended colour, achieved by artist and printers hand-inking with their fingers and palms.

Baynard returned to TGL in 1988 to create The London quartet, a series of four mixed-media prints notable for their playful juxtaposition of two- and three-dimensions. In these images an illusion of depth is created by overlapping objects or fabric folds. Baynard manipulated the tonal range of spitbite aquatint to suggest volume while employing the flat qualities of woodblock to depict pears which seem to float on the paper. Baynard pushes this spatial confusion further by projecting elements out of the composition onto the picture frame, such as the magenta drapery in Notting Hill Gate. By dividing the picture plane the artist reminds us that this is an illusion, an idea he articulated in 1981: ‘Painting is abstract; on its own. Paint is only dabs on a surface.’[iv]

In light of Baynard’s consistent depiction of still-life scenes throughout his career, his assertion that ‘it’s certainly not about flowers’ is surprising. In fact, for Baynard the still-life genre is merely a conduit to explore his passion for colour and form, a means of creating emblematic works of ‘a kind of American pared-down simplicity.’[v]

Despite The London quartet’s genesis in drawings made during a bleak London winter, the series – with its saturated palette of jewel-like hues – is an exultant celebration of colour. Henri Matisse’s daring use of colour has long been an influence on Baynard and here he pays tribute to the modern master by including references to his work in each composition. 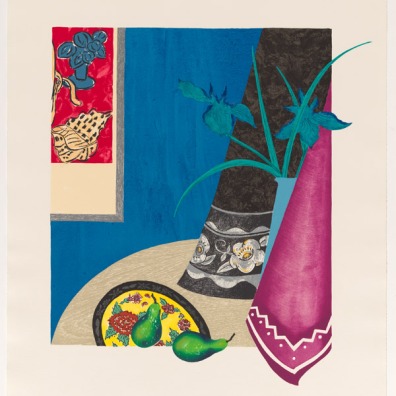 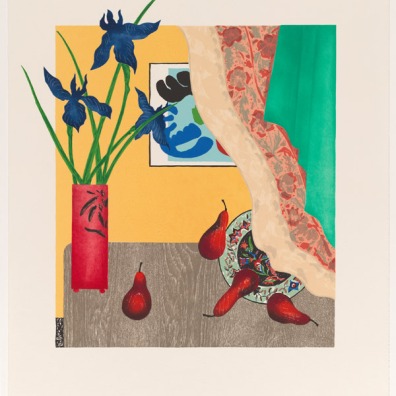 [i] The Provincetown Print, also known as the White Line Woodblock Print, was developed by individual artists working in Provincetown in 1915-1916. Unlike the Japanese printing method that required a different wood block for each colour, this new method used one block with a tiny groove cut between each colour to separate it from the next, preventing colours from running together.

[iii] All quotes unless otherwise specified are taken from an interview with Ed Baynard conducted by Julia Greenstreet, February 12 2015.